Good reason to celebrate: Minnesota network up and running

The successful launch of an expanded broadband network that extends across southern Minnesota will support the future growth of communities and businesses in the largely rural region of the state. Cities and towns now have improved connectivity to the region, nation and the world to help them keep and attract new businesses opportunities.

Business, industry and political leaders gathered February 18 in St. Paul, Minn., to celebrate the new network. U.S. Sen. Amy Klobuchar of Minnesota, was among the speakers. She told a festive audience of about 50 people that the project is a good model of accomplishment and offers new promise for the region.

She said one of Minnesota’s greatest strengths is having a thriving business community that continues outside the metropolitan areas. The network strengthens the communications infrastructure in this rural region, providing greater interconnectivity and expanded access to advanced telecom service, such as cybersecurity protection, for businesses across the region.

“This is a good example of some work, not just across telephone company lines with the eight companies, but also state lines. As we know, so much of our strength can come from being able and willing to work with our neighbors, in this case, Iowa and South Dakota,” Klobuchar said.

The senator congratulated everyone involved with the project, and said she was excited to see the future returns for southern Minnesota.

Six independent telephone companies in southern Minnesota, one in northern Iowa and SDN Communications in South Dakota started talking about linking their networks in 2014. It leverages the thousands of existing fiber miles that make up the underlying networks built and operated by these rural telecom companies. Construction of the linked network was completed during the final quarter of 2015 and opened for business in early 2016.

The companies involved in the project include: 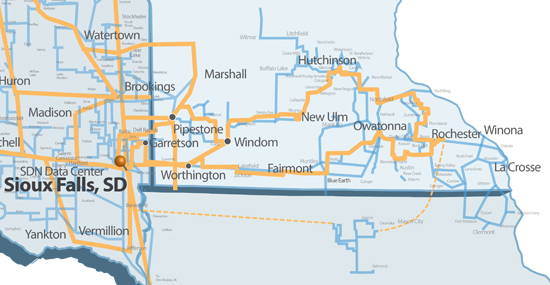 SDN is the managing partner of the network, which begins just south of the Twin Cities and extends across southern Minnesota from South Dakota to Wisconsin. Northern Iowa is expected to tie into the network in the future.

Bill Otis, president and CEO of Nu-Telecom, says the eight participating companies in the project shared a vision about creating new opportunities by working together.

“The partnership offers a robust, redundant and reliable network that delivers local, regional and national interconnectivity,” he said.

U.S. Sen. Al Franken of Minnesota could not attend the event, but he provided a video statement to thank people and companies for their work. Access to broadband Internet is a regional economic development issue that affects the future and vitality of every person and business in southern Minnesota, he said.

“The work you're doing is critical to making sure that our schools, libraries and health care facilities are connected to the world. In the 21st Century, commerce, connectivity and the livelihood of millions of Americans is dependent on a strong broadband network,” Franken said.

Other dignitaries at the event included representatives of the Minnesota Department of Employment and Economic Development. A representative from Congressman Tim Walz’s office also attended the event.

“We’re excited to expand our reach through the unique development of Southern Minnesota Broadband,” Brown said.

Any business with multiple locations, such as a bank, is an example of an organization that could benefit from the new network, Brown said. About 200 miles of newly deployed fiber physically connects the networks in Minnesota and South Dakota. More exciting are the new relationships that will be developed, he said.

“Now as we begin to turn up customers on this fiber, linking us to more companies, more people, we believe the possibilities are limitless,” Brown said.

Get to know SDN and their members better. Take a look at products and services available on the SDN Communications website or sign up to receive this blog weekly, using the button below.