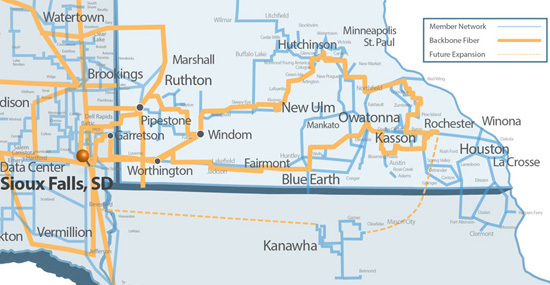 Businesses in southern Minnesota stand to benefit significantly from SDN Communications’ experience in building and operating an advanced broadband network in South Dakota.

SDN and its 17 member companies in South Dakota have built a 30,000-mile fiber-optic network that crisscrosses the state from east to west and reaches into western Minnesota and several other regional states. Collectively, SDN and its member companies offer Internet connectivity and an array of other telecommunications services.

Now, independent telecommunications companies serving southern Minnesota have joined together with SDN to create a broadband network that will spur economic activity in the region.

That group is comprised of six independent telephone companies in southern Minnesota, one in northern Iowa, as well as Sioux Falls-based SDN. The group interconnected the systems of the six Minnesota members and added some new connections to create a broadband network to serve the southern quarter of Minnesota.

The network positions the eight participating companies, as well as rural communities within the service territory, to compete for new business opportunities on a local, regional, and national scale. Because of its experience and success in the broadband business, SDN was asked to serve as the managing partner for of group.

Mark Shlanta, SDN’s CEO, says the project is SDN’s biggest expansion in more than a decade in terms of territory, fiber miles and business opportunities. SDN specializes in providing connectivity and managed telecom services to businesses and institutions.

“These communities were already well served, but by entering into this partnership these companies have expanded their geographic reach through interconnectivity to improve services for their customers and attract new business opportunities to southern Minnesota,” says Carrie Johnson, manager of government and external relations for SDN Communications. “By coming together, these companies can offer a single point of contact and seamless connectivity.”

Companies in the group, in addition to SDN, include:

The network’s backbone consists of 760 miles of fiber optic cable, including about 200 miles of newly deployed lines. The network crosses southern Minnesota from the border of South Dakota to Wisconsin and extends from south of the Twin Cities to Iowa. Future expansion is expected to tie communities in northern Iowa directly into the network.

“We’ve put together a very nice, robust network in southern Minnesota,” says Bill Otis, who chairs the Board of Governors of the new group. He's also the president and CEO of NU-Telecom. “It provides additional fiber routes for our customers as well as for businesses that want to get into our service area.”

In addition to representing a significant investment in the region’s communications infrastructure, the robust network expands access to advanced security services, such as managed cybersecurity offerings.

The project has been in the works since 2014. Most of the organization and new construction took place in 2015 and the network was completed in the first quarter of 2016. Now officials are spreading the word that the new network, participating companies and host communities are ready for business.

SDN is hosting a Network Launch Party to celebrate the completion of the initial phase of the project. The February 18 program and reception begins at 3 p.m. at 317 Washington St. in St. Paul. It coincides with the conclusion of the Minnesota Telecom Alliance’s 2016 Broadband Conference also being held at the 317 on Rice Park Event Center. Drinks and appetizers will be served.

State and federal leaders will speak about the importance of broadband infrastructure and will join business leaders to celebrate the expansion of advanced broadband services and the promise of new economic development opportunities. Attendees are asked to RSVP.

Take advantage of the network by putting it to work for your business. You can connect with SDN using the button below.