DSU is helping bridge the gender gap in cybersecurity 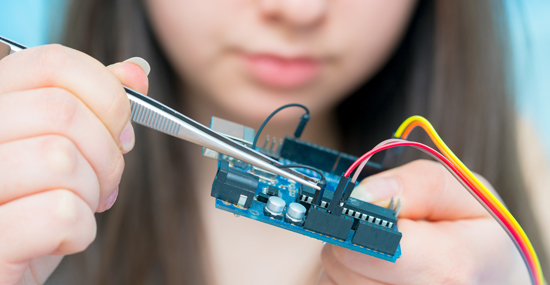 Nationally, only about 11 percent of the people working in cybersecurity are women. Dr. Ashley Podhradsky, a faculty member at Dakota State University, doesn’t like to talk about the gender imbalance, however.

In outreach programs to girls, the associate professor of digital forensics prefers to talk about the positives of working professionally in cybersecurity and related high-tech fields.

“We address the issue by not talking about the problems. We show them the fun side of cybersecurity,” she said.

People have talked for years about how women are under-represented in cyber professions, Podhradsky said.

So, in programs such as DSU’s upcoming CybHER Security Camp for girls in the fifth through eighth grades, the emphasis is on the dynamic and challenging possibilities associated with learning about cyber science.

The fourth CybHER camp will be held June 24 through June 28 on the DSU campus in Madison, S.D. About 125 girls from 14 states are registered to attend. Podhradsky is the camp director.

The free camp, which is funded by the National Security Agency, focuses on educating, motivating, and encouraging young women to explore cyber security. Sioux Falls-based SDN Communications, a premier regional provider of broadband connectivity and cybersecurity services for businesses, is among the camp’s sponsors.

Dr. Heather Wilson, secretary of the U.S. Air Force and former president of the South Dakota School of Mines and Technology, is one of this year’s speakers. She led the Rapid City school from 2013 to 2017. Wilson also served in Congress for 11 years as a representative from New Mexico.

Even if girls who attend the camp decide to go into other fields, they will benefit by becoming better stewards of digital technology, Podhradsky said.

Although women are under-represented in cyber professions, diversity in gender isn’t the only national concern about the future workforce. Nationally and internationally, a serious shortage of cybersecurity professionals has developed.

The Center of Cyber Safety and Education has forecast that by 2022, there will be a shortage of 1.8 million information security workers in the world. Podhradsky acknowledges the looming problem.

“As for security workers, we need more than universities can churn out. We need more students first in order to get more people. Along with that comes more women. We need better diversity,” she said.

It almost goes without saying, but expanding diversity in work teams adds perspectives and improves results.

DSU is on the front line of training technical workers – men and women – for the future. The school specializes in computer management, computer information systems and related undergraduate and graduate programs. And it is making inroads in getting more women interested in interested in cyber-related fields of study.

From 2012 to 2017, DSU experienced a 296 percent increase in women studying computer science, cyber operations and network security, Podhradsky said. That translates to a jump from about 40 students to about 120.

“We’ve had intentional efforts to increase gender diversity. And we’ve done dozens of outreach events,” Podhradsky said. “We’ve impacted over 10,000 girls. We’re thrilled to see that our work is having an impact.”

In the past, one factor that probably has steered women away from the cybersecurity profession is the stereotype that professionals typically often work alone in a dull environment. Once people realize that the work is more social in nature and constantly presents fresh challenges, girls are more open to considering the profession, Podhradsky said.

A survey of young women released earlier this year by Kaspersky Lab, a global cybersecurity company, indicates that 16- to 21-year-olds seem increasingly open to careers in cybersecurity. Well over half of the respondents (57 percent) said cybersecurity is important, for example.

Young women also expressed interest in working in fields they could feel passionate about and earn a good salary.

Careers in cybersecurity can fulfill those desires. Programs such as DSU’s CybHER Security Camp are helping get that important word to girls in South Dakota and beyond.