Watch a hacker at work during Cybersecurity Conference live demonstration 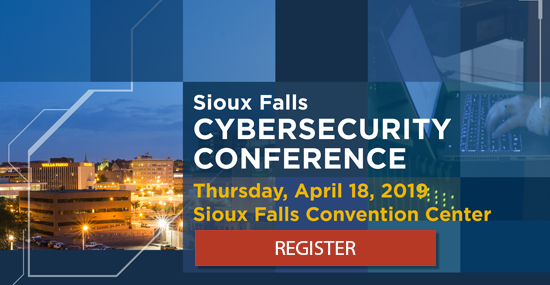 When burglars break into a house, they don’t alert anyone who may be home. Cyber thieves operate in a similar fashion. They prefer to go unnoticed when they’re stealing valuable information from business networks.

“The No. 1 weakness that we run into consistently is the lack of ability to detect cybercriminal activity inside their firewall,” said Robert Dowling of Dynetics.

He’s the cyber risk practice lead at the applied science and information technology company in Huntsville, Ala.; cyber services are among its specialties.

“We tell folks that cybercriminals aren’t magical. Their activities are detectable. But you have to know what you’re looking for,” Dowling said.

And you have a chance to see how it's done at the 2019 Sioux Falls Cybersecurity Conference on April 18 at the Sioux Falls Convention Center. Dynetics' cybersecurity experts Greg Jackson and Craig Mitchell will perform a live hacking demonstration at the event hosted by the Sioux Falls Area Chamber of Commerce.

“Cybersecurity is a concern not only for IT professionals, but also for business owners, executives, HR professionals and others,” said Jason Ball, president and CEO of the Chamber. “This conference is a chance for people in all types of roles to gain some practical skills and foundational knowledge that they can use to protect their business from cyber threats.”

“The point of the demonstration is to make people aware of how easily traditional cybersecurity controls can be defeated with social engineering and why it’s essential to have additional preventive controls inside the firewall as well as the ability to detect activity inside your environment,” Dowling said.

Identifying threats may require using tools such as Endpoint Detection and Response technology.

As Dynetics’ presentation will likely demonstrate, people typically are the weakest link in any cybersecurity strategy. Cyber thieves often trick employees at the organizations they’re targeting to get into systems.

Other presenters at the half-day conference include best-selling author Bryce Austin. He’s giving the keynote address and has firsthand experience dealing with cybersecurity crises. His book, Secure Enough? addresses 20 cybersecurity questions for business owners and executives.

Cybersecurity can be a competitive advantage for a company, according to Austin.

“One of the largest competitive advantages that any company can have is the trust of its customers. Customers that trust your organization are less concerned about price, and are more tolerant of glitches or small issues. They are more loyal to you when a new competitor emerges,” Austin writes. “Trust drives emotion and emotion drives buying behavior.”

Other speakers include Bill Walker of ID Shield, who will talk about identity theft, and U.S. Sen. Mike Rounds of South Dakota.

The conference will run from 7:30 a.m. until 1:30 p.m. on Thursday, April 18 at the Sioux Falls Convention Center. Tickets are available for $85 per person. (A limited number of $40 tickets for students also are available.) To register, visit the 2019 Sioux Falls Cybersecurity Conference website.

In addition to SDN Communications’ gold sponsorship of the event, several other businesses have stepped up to serve as silver sponsors:

Jackson has more than 20 years of experience in the field. Greg has worked with DoD, commercial, and state & local government organizations to perform risk assessments and develop enterprise cybersecurity and risk management strategies, programs, and processes.

Greg manages a team of security professionals, including NSA-approved Red-Team analysts, that engage in black-box penetration testing and development of enterprise solutions designed to thwart cyber-aggressors.

Greg regularly speaks at conferences on the topics of framework implementation and effective security controls.

Craig has a BS in Management Information Systems, from the University of Alabama in Huntsville and holds the following certifications: OSCP, CISSP, MCITP, MCSE, CCNP + Security, GSEC, CEH.