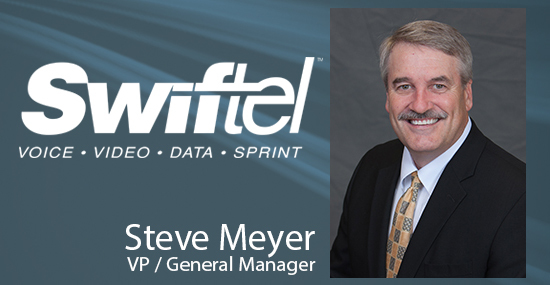 Brookings, the seat of Brookings County and South Dakota’s fourth-largest city, is unique in several ways.

The community operates under a home rule charter and employs a city manager. More notable, however, is the fact that the city owns and operates most of the utilities and public services in town.

In addition to commonly offered municipal services, such as water and wastewater, the city owns the community’s hospital, golf course, liquor store, airport and electric utility. It also owns the Swiftel Center, an event center that carries the name of another city service. Swiftel is the business branch of Brookings Municipal Utilities that provides telephone, TV and Internet services to homes and businesses in the city.

In addition, Swiftel has a business contract with Sprint to provide wireless services along the Interstate 29 corridor from Sioux City, Iowa, to the North Dakota border. So, Swiftel operates two Sprint stores in Sioux Falls and one each in Brookings, Sioux City and Watertown.

Swiftel also is one of the 17 independent phone companies in South Dakota that own Sioux Falls-based SDN Communications, the region’s premier provider of broadband connectivity and telecommunications services to businesses and institutions.

Steve Meyer, executive vice president and general manager of Brookings Municipal Utilities, oversees Swiftel as well as the city’s electric, water and wastewater services. His areas of responsibility employ 190 to 200 people, about half of whom work in telecommunications.

The telecommunications system might be governed in an unusual style, but it’s effective, Meyer says. Swiftel is a money-making operation that generates revenue for the city’s overall utility fund.

The telecom system is owned by its primary customers – the taxpayers of Brookings - and operates for their benefit. A key benefit of municipal ownership is that it provides local control, says Meyer, who serves on the SDN Board of Directors.

“I think this benefit is also realized by the other consumer-owned telephone companies that are SDN members,” he says.

Most of SDN’s member companies are cooperatives or are municipally or tribally owned. SDN also recently expanded its network by partnering with six independent phone companies in southern Minnesota and one and in northern Iowa.

Although its wireless business is regional, Swiftel primarily serves Brookings, which has about 22,500 residents. It provides phone, TV and Internet services and competes with several private businesses for customers in Brookings. Swiftel fares well in the competition, however. It’s the market leader in voice and Internet services and a top contender in video services, Meyer says.

“We like to think that our advantage comes from great employees, and we’ve invested in state-of-the-art infrastructure. We have fiber to every home,” he says. “And we have the experience of serving customers for more than 100 years.”

Changes in the past 20 years have been striking. In 1996, Brookings Telecommunications was a voice service with fewer than 15,000 subscribers. Today, it provides voice, video, Internet and wireless services to more than 33,000 subscribers.

Brookings lacks the larger population base of regional cities such as Sioux Falls and Minneapolis, but it tries to maintain a similar standard of living for residents.

Rather than explosive growth, Brookings has enjoyed measureable, consistent growth, which is good, Meyer says.

Through the years, changes in technology and regulation have driven most of the changes in telecommunications. Meyer expects those forces to keep shaping the business locally and create opportunities more so than challenges.

Learn more about Swiftel and SDN’s other member companies.