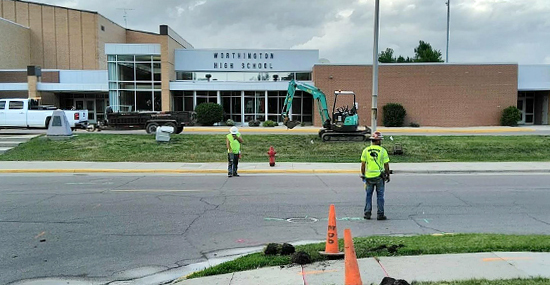 Before public schools in Worthington, Minn., were connected directly to a fiber optic network, they relied for years on wireless internet with spotty service.

“That wireless network worked pretty well the first couple years, but as the demand for increased bandwidth came along, we were having a lot of issues based with the weather in southwest Minnesota. We had rain fades. We had issues with ice. We called it the ‘lake effect’,” said Amy Ernst, IT coordinator at Worthington High School.

“The band signal would warp at certain times of the year because of that. The wind would blow and wiggle the antennas. Basically, anything but a calm, cloudy day would affect our internet access or bandwidth ability. It was very frustrating,” Ernst said.

With help from SDN Communications, schools in Worthington switched over to a fiber-based, Wide Area Network and got an improved level of broadband connectivity around July 1. A Wide Area Network, or WAN, is a telecommunications network that extends over a large geographic area.

The Worthington schools are part of the Southwest West Central Service Cooperative (SWWC), which is based in Marshall, Minn. SWWC members selected Sioux Falls-based SDN and some of its member companies in Minnesota and South Dakota to connect its members to a fiber ring and improve broadband capabilities. They went through a competitive Request for Proposal process.

The SWWC cooperative provides educational and administrative services, including technology, to member schools, cities, counties, and other government agencies in an 18-county area in southwestern and west-central Minnesota. The SDN team is providing broadband connectivity and services to about 50 sites, including schools, libraries and agencies.

Ernst is excited about her school now having a dependable connection to the internet and expandable broadband service. Having fiber connectivity and the potential for increased bandwidth “will change the way we do business,” she said.

With inconsistent internet service, teachers might encounter problems in scheduling lessons that involve technology, for example, or students might have trouble taking standardized tests offered online.

Ernst is a member of the SWWC Wide Area Network Advisory Board. She was familiar with SDN before the co-op selected the company for the project. Crews from SDN and the co-op have worked well together, she said.

“The cooperative work environment between the two entities made a difference for schools, and we appreciate that,” Ernst said.

Ryan Dutton, an SDN account executive stationed in Blue Earth, Minn., is one of the primary contacts available to the co-op. Based on the feedback he’s heard, the reaction has been positive.

“Winning the RFP, delivering in the required timeframe and executing the services are really important for SDN and our member companies in Minnesota in terms of growth in the region,” Dutton said.

In addition to expanding the SDN Communications network, work on the project is increasing SDN’s familiarity with people and communities in the region.

“Winning big projects like this tends to lead to more relationships, which ultimately positions SDN and our member companies for future growth,” Dutton said.

Nearly three years ago, SDN and six southern Minnesota companies and one in Iowa created an alliance. They connected themselves with an 800-mile fiber network, which is also connected to SDN’s 17 member companies in South Dakota and their 45,000-mile network. The connections and work efforts are helping elevate SDN’s name and reputation in the region.