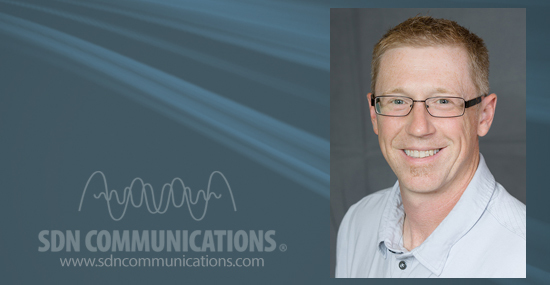 Despite dropping out of college after two years, Gary Glissendorf has accumulated substantial expertise and an impressive record in the technology industry.

He’s a largely self-taught expert who repeatedly demonstrates the ability to understand advancements in technology, develop and execute plans and lead effectively in an evolving field.

Glissendorf has worked in the technology industry for more than 22 years, including 17 years at SDN Communications in Sioux Falls. He credits his expertise in broadband services to reading books – a lot of books – as well as to corporate training opportunities and hands-on experience.

He got his professional start in technology in 1996 at The Credit Store, a former credit card center in Sioux Falls. His first job actually was in collections at a Bank of Hoven center, but he volunteered to help set up computers during the company’s transition into The Credit Store.

“When I started at The Credit Store, I started reading books, and when I came to SDN I read more books,” he said. “And SDN is always good at sending people for training.”

Stints as a network systems supervisor and as a telephony engineer at The Credit Store helped him get to SDN. He initially came to the company in 1999 as a data network engineer.

His resume includes a brief stint as an IP and data engineer with Onvoy in Plymouth, Minn. He and his wife, Susie, decided after a year in the Twin Cities that they preferred living in their home state. Glissendorf returned to SDN in 2002 as a telephone technician. Since then, he has worked in several positions, including as a data network engineering supervisor.

During the past few years, he’s focused on improving customers’ experience with internet and MPLS services. He’s also worked on multiple technology upgrades and technology transitions.

In 2014 and 2015, he played a key role in the development and launch of SDN’s Managed DDoS Protection Service, which helps clients ward off Distributed Denial of Service (DDoS) attacks that can clog or damage systems.

He also participated in a major refreshing of SDN’s MPLS network, a three-year project that was completed in 2016. MPLS is a routing protocol primarily used in private-line Ethernet services.

“My primary focus since coming to SDN in 1999 has been IP routing, Ethernet services, MPLS and cybersecurity,” he said. “DDoS is kind of a new venture.”

Through the years, Glissendorf has led engineering teams, worked with managers in other departments and developed relationships with outside vendors. He’s currently evaluating the potential for new services in areas such as data encryption and data transmission on private lines.

He welcomes the opportunities to continue to learn about technology by helping evaluate and launch new products and services.

“That’s something I really like about SDN,” he says.

Ongoing improvements in network “speeds and feeds” are the most significant changes that have affected the industry during the past two decades and probably will continue to be major factors in his work life.

Away from work, he enjoys coaching soccer, movies and vacationing with his family – ideally, at a resort. He and his wife, who is a payroll manager with Avera Health, have two children: a daughter who attends Northern State University and son at O’Gorman High School.

Glissendorf was born and raised in White Lake, S.D. He attended Dakota State University for two years but didn’t graduate. Instead of continuing in college, he began his career.

SDN Communications is a leading regional provider of broadband connectivity, cybersecurity services and other telecommunications solutions for businesses and institutions.