New Board president expects need for services to keep growing 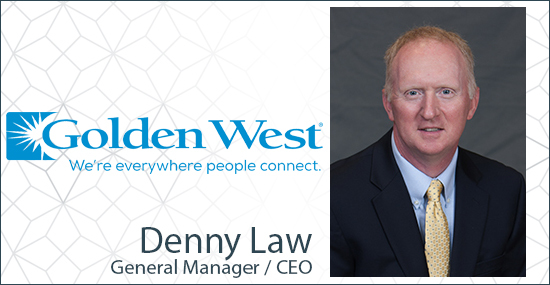 Denny Law, the new president of the SDN Communications Board of Managers, expects challenges and opportunities in the telecom industry to keep unfolding rapidly in the future.

The biggest challenge simply might be to keep up with the increasing need for bandwidth and related services that organizations in commercial, wholesale, medical, educational and governmental fields want and need, Law said.

“It will include everything from bandwidth and capacity to different locations as well as features and services that probably haven’t been invented yet, and that will be layered on top of the broadband connectivity that SDN provides today,” he said.

Law recently succeeded Bryan Roth as the president of the Board of Managers and has served on the company’s governing board since 2008; he’s been the vice president for three years.

Owner companies, which also are known as member companies, serve their own residential and business markets with internet, phone, TV, and other telecom services. With a service area that stretches across southern South Dakota from the Wyoming border nearly to Minnesota, Golden West is SDN’s largest member company in terms of geography.

Sioux Falls-based SDN was formed by independent telephone companies in South Dakota in 1989 and has grown to become the premier regional provider of broadband connectivity, cybersecurity and related services to businesses and institutions.

The burden of expanding high-speed services in rural areas falls more directly on SDN member companies than SDN. However, SDN helps by connecting networks and centralizing some support services to help members increase efficiencies in their operations.

Roth did not seek re-election as president when the nine-member Board of Managers reorganized in July. However, he was elected to remain in Board leadership as the vice president. Randy Houdek of Venture Communications in Highmore was re-elected secretary/treasurer.

Roth said that after serving as SDN’s Board president for nearly two decades, it was time for someone else to take over.

“It was time for a change. Denny will do an excellent job. I look forward to his leadership,” Roth said.

Board members typically meet about eight or nine times a year to set general policy for SDN. Mark Shlanta runs the company on a day-to-day basis and has served as CEO since 2000.

SDN has a strong history of being able to meet technology-related challenges to serve its commercial and wholesale customers, Law said.

“I’m excited about the future of SDN, not because of the role of the Board as much as because of how successful SDN has been and how bright the future is,” Law said. “That’s a credit to both the management as well as the member companies and Board members before me.”

Law grew up in Clear Lake, S.D. He graduated from South Dakota State University with a degree in journalism in 1987 and later earned a master’s in administrative studies from the University of South Dakota. He worked in broadcast journalism for three years before getting into the telecommunications industry in 1990. He became CEO of Golden West in 2008.

He and his wife, Bonnie, live in Wall and have two high school-aged sons.

SDN is a regional leader in providing broadband connectivity and cybersecurity services to businesses in communities such as Sioux Falls, Rapid City, Worthington, and the surrounding areas. Meantime, SDN member companies provide business and residential services across South Dakota and beyond.