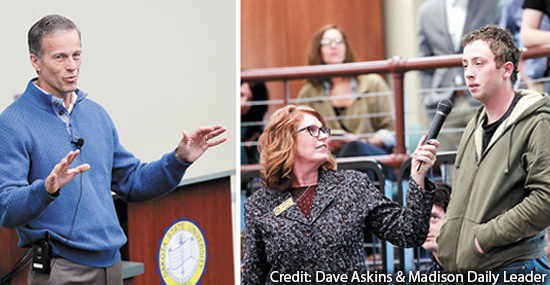 Every parent experiences moments where pride and fear can collide.

I felt one of those potentially explosive moments at Sen. John Thune’s packed event at Dakota State University last week. When the senator opened for student questions, I looked back and saw my son, Michael, at the microphone. I admit an involuntary utterance of “Oh no…” to my colleagues within earshot, but a collision never happened.

“Senator, one of the major sources of income for smaller towns in South Dakota along the highway is truckers sleeping there, eating, getting gas… Robots don’t need to eat or sleep… What is your opinion on the potential economic impact of those vehicles no longer stopping in those towns?” Michael asked.

Great question, I thought to myself. I even sent him a text message right away complimenting him.

I was equally impressed with the senator’s thoughtful reply. He described his efforts to foster a light-touch regulatory environment conducive to innovation. He recommended proactive steps to limit potential consequences, while ensuring the government doesn’t become a roadblock. A worthy answer from the man chairing the Senate Commerce Committee, which has expansive jurisdiction and oversight into nearly every aspect of our economy, including autonomous vehicles.

The students were particularly interested in 5G deployment, as well as the spectrum and wireless infrastructure required to meet the growth in mobile bandwidth demand. Thune cited a study predicting 50 billion connected devices by 2020. This will mean a steady 30 percent annual increase in connected devices. According to Cisco, the dramatic rise will come from increased adoption of mobile phones and tablets, wearable devices, and other commercial and industrial applications, such as connecting tires, roads, cars, supermarket shelves, and even cattle.

The senator told students, “connectivity of the future is something we need to be planning for today.” He has crafted a package of reforms, titled “the MOBILE NOW Act,” to boost the development of next-generation 5G wireless broadband. The bill makes more spectrum available for commercial use and reduces the red tape associated with building wireless networks. The Senate Commerce Committee unanimously approved the measure, and it now awaits consideration by the full Senate.

Internet service providers (ISPs) must plan accordingly to meet the future demands of their residential and business customers. As the CEO of SDN Communications, I’ve enjoyed a front seat witnessing the dramatic growth in bandwidth. Just last year, SDN’s network experienced a 77.3 percent increase in average Internet usage between 2015 and 2016.

In addition to serving banks, hospitals and businesses, SDN provides fiber connectivity to hundreds of wireless towers across South Dakota, southern Minnesota, and northwestern Iowa. SDN is currently working with Verizon Wireless to deploy small cell wireless technology in cities across South Dakota, which will extend the reach of 4G and eventually 5G. SDN has direct experience working through the regulatory and permitting red tape Thune is seeking to cut. The MOBILE NOW Act will spur the deployment of small antenna infrastructure that is necessary for next-generation wireless.

Thune’s leadership at the helm of the Senate Commerce Committee is making it easier for the private sector to deploy wireless infrastructure. His efforts position our country to become the world leader in 5G. Effective teamwork between the private sector and all levels of government is required for our country to develop the necessary wireless infrastructure and meet the growing demands of American consumers. 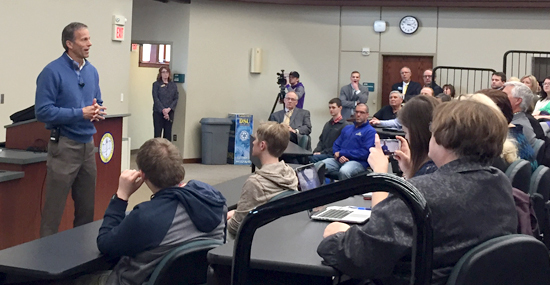 Thune concluded his remarks at DSU by describing his mother’s efforts to expose her children to the world – both in and beyond Murdo, SD. She expected them to play piano, read an hour of classic literature after school, and she took them to the library to browse the World Book. The college students, having grown up with the Internet at their fingertips, likely missed the senator’s reference to the encyclopedia.

What they didn’t miss, however, was Thune’s vision for our state and country. The students in the auditorium understood. They had already self-selected themselves as technology leaders, having chosen a college specializing in computer technology. As Thune noted, South Dakota is fortunate to be home to Dakota State University. I couldn’t agree more. These students are key to our future success. They will be the ones creating – and protecting – the information traveling over communications infrastructure and driving demand for bandwidth.

I’m proud to say my son is among them, a senior graduating this May and moving on to graduate school and generating the kinds of questions needing exploration in our evolving digital world.

Personally, I evolved from the experience. My unwarranted parental fear dissipated and only pride remained because my son demonstrated he’s an adult ready to tackle the technical and economic questions of the day.