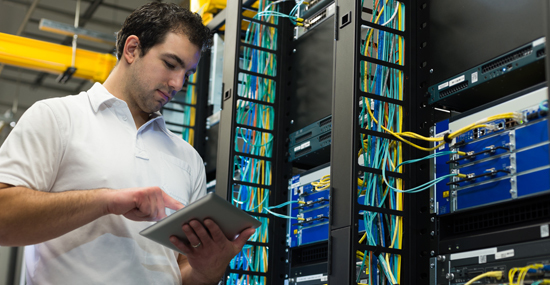 Eighteen students are on track to graduate in May from Mitchell Technical Institute with degrees in telecommunications. About 90 job opportunities await them.

“Last year we graduated 17, and they had 110 job opportunities,” said Mike Benjamin, a telecommunications instructor at the Mitchell school.

The pay awaiting graduates of the two-year program is good, too. Last year’s graduates averaged starting pay of $18.50 an hour. That’s more than double South Dakota’s minimum wage of $8.85 an hour.

As MTI points out on its website, the U.S. Department of Labor and Bureau of Labor Statistics list the median annual wage for telecommunications workers as $47,150.

Good pay and plentiful job choices are expected to remain available in the telecom field for years to come. That’s an inviting situation – one that high school students, recent graduates, their parents and other career advisers should keep in mind.

There are a few other schools in the multistate region that offer telecommunications programs but not many. Employment recruiters from several states routinely pursue MTI graduates.

“With all this high-speed internet and everyone wanting to build 5G (networks) and people trying to get fiber into the ground, we have employers from out of state coming in looking for technicians,” Benjamin said.

Last September, a general manager from upstate New York visited MTI and offered to hire the entire graduating class, he said. In addition to South Dakota, employers in states that include Nebraska, Wyoming and Montana recruit these telecommunications graduates.

“There are quite a few companies in South Dakota that always seem to be looking for technicians,” Benjamin said.

It almost goes without saying that the job placement rate for graduates of MTI’s telecommunications program is 100 percent.

Students in the telecom program study the art and science of getting information from one point to another, regardless of whether the information is in the form of voice, video or data. In addition to examining state-of-the-art telecommunications technology, the program provides students with a solid foundation in mathematics, electronics and general education, according to the school.

Students are prepared to pursue jobs as programmers or technicians who work in telephony, cable, networks, outside plants, or central offices.

At one time, telecommunications was MTI’s flagship program. However, students have drifted into other technology-related fields. The school also offers programs in areas such as health sciences and construction, which also are tempting career options for students.

The two-year telecom program can accommodate annual class sizes of 24 students, but last year’s enrollment dropped to a about third of that. That’s raised concerns with the school and regional employers, including SDN Communications and its member companies across South Dakota.

“We’re trying to build (the program) up because there’s such a need,” MTI President Mark Wilson said.

Overall enrollment at MTI has been at about 1,200 students for the past three years, according Wilson and Dean of Enrollment Services Clayton Deuter. The strong demand for workers throughout the region is prompting a lot of young people to enter the job market immediately after high school, they said.

“The economy is really good right now. They’re going into the workforce making $12 or $13 an hour and thinking that’s awesome,” Deuter said.

A two-year investment in education would significantly increase students’ longer-term earning potential. Tuition, fees and related costs for the 18-month telecom program total about $17,000, but financial assistance is available.

Among the resources available is MTI’s Double Edge program, which combines the school’s workforce recruitment program with the state’s Build Dakota Scholarship program. Essentially, an employer sponsors a student who, in turn, agrees to work for the company for three years after graduating. A Build Dakota Scholarship helps fund the student’s education.

The Build Dakota program is designed to train workers to fill positions of high need in South Dakota industries.

SDN and its member companies have a strong interest in helping make sure there’s an adequate supply of well-trained workers available in the region in the future. Regardless, telecommunications remains a good career field for young people.

“There’s a lot of great careers out there, but not a lot of students going into the program. That’s our concern,” Deuter said.

Visit MTI’s website to learn more about its telecommunications program and the Build Dakota Scholarship.