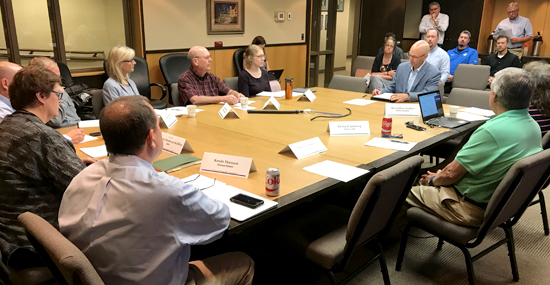 Minnesota has taken an aggressive grant approach in funding hard-to-reach rural areas for broadband connectivity, and it hasn’t been afraid to reach across state lines for providers to improve Internet access.

Gov. Mark Dayton’s Broadband Taskforce visited Luverne on June 28. It heard from Alliance Communications on how the Garretson, SD, -based company serves rural Minnesota residents thanks to a $5 million Border-to-Border Broadband state grant and an additional $1 million Rock County grant.

SDN account executive Ryan Dutton works from his home office in Blue Earth, Minn. He told the committee a personal story about how these projects are economic drivers for rural America.

“I know a lot of my peer group who grew up in Faribault County would come back to Faribault County if there were jobs and opportunities to do so,” Dutton said. “I think home offices with broadband infrastructure might be one of the real drivers in the next decade to maintain the intellectual investment [the communities] make in the young people to have them come back.”

That investment in Rock County comes with a bit of sticker shock though: $11,500 per customer. At an average $100 monthly bill, it would take Alliance ten years to recoup the investment if not for the grants.

“No company would ever be able to do this without grant funds from Minnesota DEED (Department of Education and Economic Development) and Rock County,” said Alliance Chief Financial Officer Kari Flanagan.

The landscape contributed to the high cost.

Named for its Sioux Quartzite outcroppings and deep bedrock, the Rock County fiber deployment took special boring bits because the quartzite ranks second only to diamond as the hardest known natural material. Contractors broke many an expensive bit during plowing. Still, in this or other rural projects, distance plays the most significant role in cost. Rock County customers can be miles apart versus one mile of fiber in a city that can connect hundreds of customers.

“In a metro, densely-populated area, it’d be nowhere near that cost,” said taskforce chair Margaret Anderson Kelliher. She encouraged the committee and advocates in the audience to lobby Minnesota legislators for at least one more year of strong state grant support.

While rural construction costs prove challenging, some connectivity projects also suffer from broadband adoption rates. That has not been the case for Alliance. Marketing Supervisor Amy Ahlers told the taskforce the take rate exceeded expectations: 80 percent of the Rock County homes buy the broadband services that include phone, Internet and digital TV.

“We want to bring the best things we can to these customers,” said CFO Flanagan of the cooperative’s “Wired Differently” philosophy, which she said is more than a marketing tagline.

Whether it’s Alliance delivering fast and reliable Internet access to farms or SDN Communications, via the Southern Minnesota Broadband partnership, connecting regional and national businesses, the technology sets up rural Minnesota for success much like electricity did a few generations ago.

“What are the opportunity costs missed if we didn’t do this, if we didn’t connect these surrounding communities. What happens?” taskforce chair Anderson Kelliher asked rhetorically.

Read more about SDN’s member companies in South Dakota and Minnesota in our Member Communities blogs.