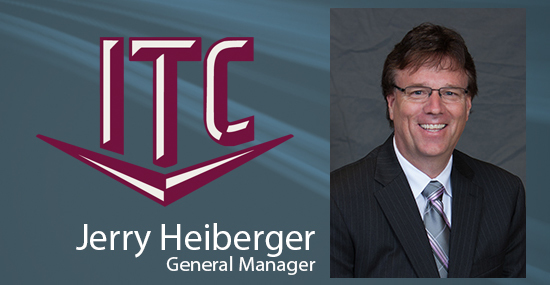 The market area served by the co-op based in Clear Lake, S.D., weaves around many of northeastern South Dakota’s prairie lakes and extends south roughly along Coteau des Prairies, an East River plateau. The rise in the flatlands juts into western Minnesota, where it’s known as Buffalo Ridge and a good location for wind farms.

General Manager Jerry Heiberger is particularly proud of how ITC has grown and evolved over the years to serve a predominantly rural area with top-line telecommunications services.

“We’re trying to expand the footprint and the benefits of being a co-op to as many people as we can in this region of the state,” he says.

Heiberger is also proud that ITC is one of SDN Communications' 17 member-owner companies in South Dakota. SDN is the premier supplier of broadband connectivity and related telecommunications services to businesses in the Sioux Falls area. SDN also helps member companies such as ITC serve their residential and business customers.

“It’s a great partnership,” Heiberger says. “SDN has opened so many doors for companies like ITC and allowed us to offer our customers new and better services.”

ITC provides customers with a range of internet, telephone and cable TV services. It also provides some wireless service and is beginning to offer home-automation and remote-monitoring services. About 70 percent of its market is connected with fiber to the home.

“We want to reach 100 percent within the next five or six years, so that all of the members of the co-op can receive the benefits of improved connectivity”, Heiberger says.

He’s worked for ITC or one of its predecessor organizations since 1980. He became general manager in 2002 and has helped guide the co-op through a period of significant change. He plans to retire at the end of 2016.

For more than 60 years, the co-op has had the good fortune to be aligned with people, including board members, who had a vision for the future, Heiberger says. Current board members include Penny Krause of Lake Benton, Minn., who two years ago became the first female board president of a telecommunications cooperative in South Dakota.

Today, the co-op has 70 employees. Its 4,200-square-mile service area includes parts or all of 12 counties in South Dakota and four in Minnesota. Among the 40 communities, it serves are Webster, Clark and Clear Lake. It serves the rural Brookings area.

ITC has 30 exchanges and between 13,600 and 14,000 access lines, depending on the time of the year. The number of active lines fluctuates largely because of the large number of summer homes at lakes.

“Because we live and work in our communities, no one knows our customers better than we do,” Heiberger says. “Not only can we call most by name, but many times we know what services they have and how they use them. Our customers are our friends and neighbors; we’ve built relationships with them.”

The co-op doubled in size in the mid-1990s when it purchased some US West service areas and then brought the new customers into membership of the co-op. It also earned a spot in state telecommunications history in 1996 by becoming the first commercial Internet provider in South Dakota.

Challenges for the future include keeping up with constant changes in technology and dealing with the uncertainties of government regulation at the federal level, Heiberger says.

Opportunities are likely to center on new services provided to homes and businesses through broadband connectivity, he says. Home-automation and remote-monitoring products and services are examples.

Learn more about the co-op on the ITC website.