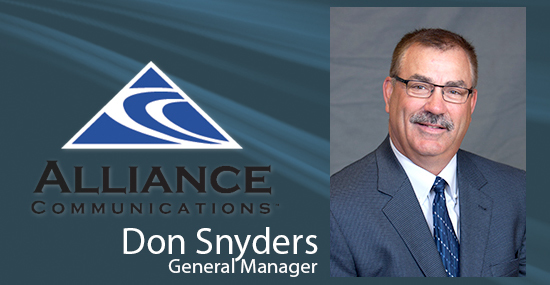 Before 2016, Alliance Communications will begin a new era. The next chapter in the history of the telecommunications cooperative will start with a new leader.

“I spent basically all of my career with Alliance Communications,” he says.

Alliance, which is based in Garretson, is one of 17 independent phone companies in South Dakota that own Sioux Falls-based SDN Communications, the region’s premier business provider of broadband connectivity and related high-tech services.

In addition to his responsibilities with Alliance, Snyders is the vice president of SDN’s Board of Directors.

He officially announced his coming retirement April 18 at the co-op’s annual meeting in Brandon. Snyders, 58, hasn’t made detailed plans for his retirement yet, other than to travel and play golf.

He expects to leave the company in good financial condition and well-positioned to pursue business opportunities that might come along in the future.

Alliance provides services such as internet, digital cable TV, and multi-featured phone services to residential as well as business customers in parts of South Dakota, Minnesota and Iowa. The company also plans to start offering home-security products in the near future.

The co-op has a history of providing the latest in technological innovation to its customers. In 2014, for example, Alliance completed a nine-year, $66 million project to bring fiber-optic connectivity to every customer in its market.

Snyders says the fiber-to-the-home deployment was the most significant company project in which he played a role.

“It gives us the capability to provide very high-speed broadband services to our customers, along with IPTV,” he says, referring to Internet Protocol Television.

Alliance prides itself in being big enough to provide customers with elite fiber-optic connectivity and services, but small enough to offer personal service.

The company officially formed in 2003 after Baltic Telecom and Splitrock Telecom merged. Prior to the merger, both companies had expanded in the 1990s by buying exchanges from US West in the 1990s. Alliance continued to expand after the merger by acquiring the Hills Telephone Company in 2003 and the Valley Springs exchange in 2005.

Today, the co-op serves approximately 11,500 homes and businesses in 19 communities in the tri-state area. The communities are:

“I think what sets us apart from our competitors is that we may not be huge, like Midcontinent Communications or Mediacom, but customers can still get really good service from us at a really good price,” says Amy Ahlers, Alliance’s Baltic-based marketing supervisor.

The company fares well in competing with other service providers in its communities, she says.

Alliance has always looked for opportunities to grow and likely will continue to do so in the future, Ahlers says.

“We’ll take a look at the opportunities that are available and, if they are right, seize them,” she says.

Staff members had known for a month or two that Snyders is making plans to retire, Ahlers says. The search for his successor has begun with help from a consultant.

“Probably the thing I appreciate the most about him is that he had a good grasp of the big picture, yet he’s also a detail person,” Ahlers says. “So I think that helped position us to be solid financially. We are technically advanced. He’s made good choices on the services we should offer.”

Visit the Alliance Communications website to learn more about the company, it's role in the communities it serves, and its services.