5G likely to bring big changes but not for years, analyst says 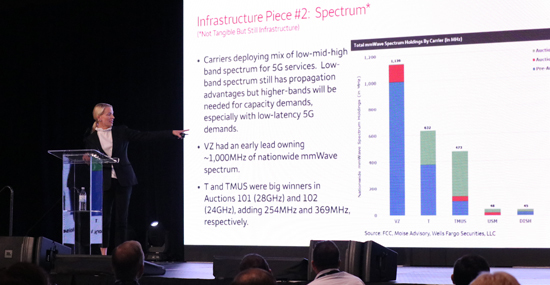 Will 5G communications technology live up to all the advance hype and fuel the newest industrial revolution?

Probably, according to a national telecommunications analyst, but it’s likely to take a decade of preparation.

Fritzsche, who has been following the telecommunications industry for 25 years, was the keynote speaker at the 2019 South Dakota Technology Showcase held Sept. 26 at the Sioux Falls Convention Center. The conference was presented by AT&T, SDN Communications and the South Dakota Chamber of Commerce & Industry.

The annual event showcased several technological innovations at the local and state levels. Fritzsche helped put some of the advancements in a national context with her presentation about the state of the wireless industry and what 5G will bring.

5G is short for the emerging, fifth generation of cellular networking technology. In the United States, four major carriers – AT&T, Verizon, T-Mobile and Sprint ­- are in something of a race to deploy 5G, mostly in urban areas. T-Mobile and Sprint are in the process of merging, however. So unless another substantial corporate player emerges, it could become a three-company race.

5G is expected to bring superfast networking speeds with less latency and more reliability to commercial, public and, eventually, consumer networks. The extent of where 5G might go is unknown.

“We don’t even know the businesses that could come out of 5G,” Fritzsche said.

The key pieces of infrastructure needed to build out 5G networking architecture are small cells, radio-frequency spectrum and fiber, she said.

Fiber will be a critical component of 5G because it connects macro towers, small cell poles, data centers, and other communications infrastructure.

“Given the bandwidth demands of 5G, macro towers and small cells will increasingly need to be fiber-based, as copper, microwave and other wired technologies do not have the bandwidth capabilities or scalability of fiber,” according to Fritzsche.

Small cells also will be an integral part of 5G. And radio-frequency spectrum remains the life-blood of wireless networks as evidenced by the increasing demand among carriers for ultra-high bands, she said.

Fritzsche is especially bullish about the tower-building business.

“I think it’s a very good time to be in the infrastructure space,” she said.

More infrastructure is needed to better serve people with existing levels of technology, too.

“As a state, we’re really quite blessed in terms of the level of broadband coverage we see,” he said.

During the past five years, rural telecoms in South Dakota have spent more than a half-billion dollars on fiber construction. 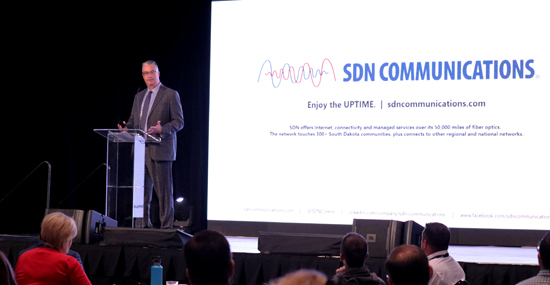 Rural telecoms affiliated with SDN serve about 80 percent of South Dakota’s geography. By the end of 2021, 93 percent of the homes and businesses within that area will be served by fiber, Shlanta said. Getting the remaining 7 percent covered will take time because the areas include some of the state’s most remote land, he said.

Financial incentives from the state and federal governments might be necessary to fill some of the gaps. 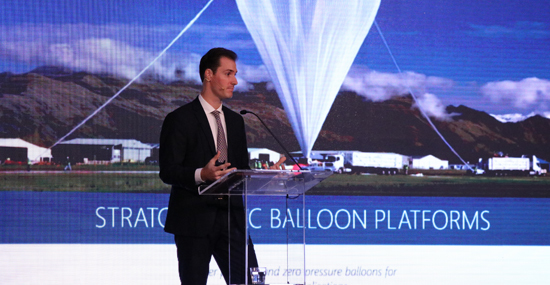 Raven Aerostar, a wholly-owned subsidiary of Sioux Falls-based Raven Industries, is helping fill similar connectivity gaps in parts of the world with aerostats.

“We are a leader in all things lighter than air,” said Sean Turgeon, program manager at Raven Aerostar. He was among the other presenters at the conference.

As conference-goers learned, impressive things are happening in technology around South Dakota – above and below ground level.

Watch Fritzsche's full keynote presentation in the video below.

You can access videos of all of the presentations through this playlist.