Sound tech finds outlet at SDN for his love of electronics 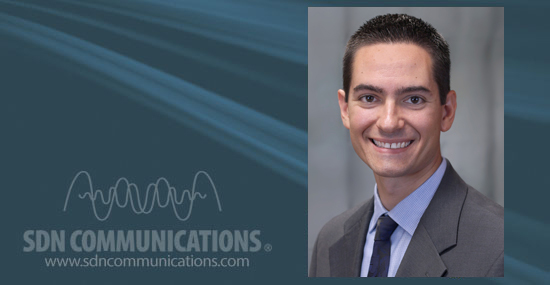 As a student, Chris Aeilts wanted to be a traveling sound technician for a big-time rock ‘n’ roll band. Playing in a band during grade school and high school helped him develop a keen interest in electronics and sound technology.

“It was my senior year in high school when I realized there were a whole lot of guitarists, but not enough sound guys. That’s when I put down my guitar and picked up a sound board,” he says. “When I get to mix a band, it’s like cranking up a really, really big stereo.”

The Aberdeen native headed to the University of Minnesota and studied electrical engineering for two years, thinking that would be the ticket to working large music venues. Then he started making human connections and finding other avenues for pursuing interests.

Today he works for SDN Communications as a commercial account executive. He started with SDN’s experienced sales team in July 2015 and brought years of experience in technical fields.

Aeilts began his career in 2002 as an audio specialist at Wooddale Church in Eden Prairie, Minn. He and two other full-time employees operated the audio and video systems at campus locations, which hosted corporate meetings and conventions as well as religious gatherings.

After three years at Wooddale, he moved on to Electro-Voice, which subsequently was acquired by Bosch. He spent about nine years with the two companies. He was based in the Twin Cities suburb of Burnsville, but spent much of his time on the road, designing and programming Graphic User Interface touch panels for basketball arenas, churches, conference centers and restaurants. He also taught corporate classes on how to install and use systems.

The biggest project he worked on was an expansion of United Nations’ conferencing facilities in New York. He was the lead engineer. He would stay in a hotel in Manhattan for several days at a time and make quick trips home.

“It was a full year and half we were involved in that project,” he says. “I got to know LaGuardia Airport real well.”

His final stop before joining SDN was with TE Connectivity’s branch in Shakopee, Minn. While there he helped configure the Distributed Antenna System (DAS) to improve wireless communication at Target Field, where the Minnesota Twins play baseball. He also worked on a large system at the University of Phoenix Stadium in Arizona prior to the venue hosting a Super Bowl.

However, he didn’t like all the time he was spending on the road, away from his wife and children.

“I was traveling around constantly. I wanted the opportunity to spend more time with my family,” he says.

He and his wife, Kristy, have two children: a 6-year-old daughter, Paige, and a 2-year-old son, Tucker.

Dennis Cromwell, former vice president of sales at SDN, encouraged Aeilts to apply for an open sales position with company. Cromwell knew Kristy’s parents, who live near Sioux Falls, and had gotten to know Aeilts over the years. Cromwell considered him a smart, articulate man of integrity.

Aeilts says he enjoys meeting people and helping them solve problems. So he applied for the position with SDN, went through the screening and interview process, and got the job.

“He came to us fairly well equipped from a competency standpoint, and he was eager to learn and absorb information,” Cromwell says.

Away from work, Aeilts and his wife enjoy taking their children to their grandparents’ farm near Sioux Falls to see animals, help with chores and watch sunsets without buildings in the way.

Aeilts doesn’t play a guitar much anymore, but he retains an interest in sound technology. He might help charitable organizations in the future, but as a volunteer. His professional attention is centered on helping area businesses with a variety of IT needs.

“We want to help them meet their business requirements, so they can grow,” he says. “We’re not just selling them a box here and there. We want to be partners with businesses to help them grow and be more successful.”