Skewered fish among 56 attractions of SculptureWalk 2017 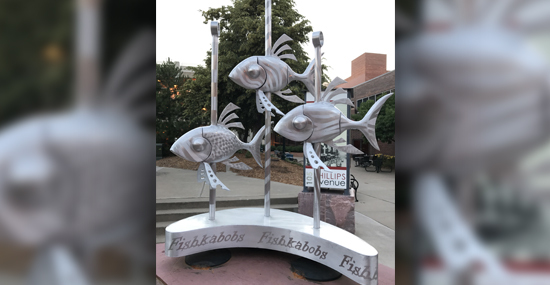 “Fishkabobs,” a creation of sculptor Robert Bruce of Sioux Falls, is quirky and fun. It’s one of 56 sculptures on display in the downtown area this summer as part of the 2017 SculptureWalk Sioux Falls program.

Fishkabobs depicts three silver-colored fish mounted on sticks. A description from the artist that is part of the display says the name of the sculpture is a play on words. “Fishkabobs is meant to be a novelty piece styled after a 1950s theme in design,” it says.

Bruce said in an interview that he set out to create some cartoon-like, three-dimensional fish. However, he had trouble coming up with a good way to display them. Finally, he drew skewers through the fish to hold them in place.

“Wait a minute,” he recalls thinking. “It’s like a kabob. Fishkabobs!”

Bruce’s all-aluminum creation sits on a four-foot, rock display in the pedestrian plaza just north of the Diner, which is at the corner of 10th Street and Phillips Avenue. Sioux Falls-based SDN Communications, a longtime supporter of the SculptureWalk program, is the site sponsor for the Fishkabobs display.

Fishkabobs is among a dozen works have been recognized by a jury of sculptors as among the best pieces in the show.

“It’s cool. I like it,” said Lori Cook of Spokane, Wash., who was among recent visitors to downtown Sioux Falls who checked out Fishkabobs and other sculptures. “It’s different.”

Thousands of people check out SculptureWalk every summer in Sioux Falls. The event has become a significant attraction for residents and visitors alike.

People who view the current sculptures can cast a ballot before the end of September on the People’s Choice winner. Ballots that double as free informational brochures about SculptureWalk are available in boxes on light poles along the display route.

Sculptures are on display in the downtown, uptown and east bank areas. There is a heavy concentration on display along both sides of Phillips from ninth to 12th Streets.

SculptureWalk Sioux Falls has emerged as one of the best art display programs of its type in the nation. Sculptures are loaned from sculptors and eventually sold or returned. New sculptures are put on display every year.

Bruce’s work has been exhibited in SculptureWalk Sioux Falls for seven years. He also has his work on display in Wyoming.

Sioux Falls started its program in 2004. Since then, 720 sculptures from artists around the nation have been displayed, said Jim Clark, director of SculptureWalk Sioux Falls.

This year’s lineup probably includes more modern, abstract works than ever before, Clark said. It also includes the most expensive sculpture ever displayed in SculptureWalk Sioux Falls, he said, referring to “Ikicin,” a large buffalo made of steel that took Colorado sculptor Gary Monaco three years to make. Ikicin sits at the corner of 12th and Phillips. The list price for it is $300,000.

“Eclipse,” by Bruce Stillman of Minnesota, was selected as this year’s top Best of Show winner. It is described as a kinetic sculpture that moves with the winds. “It represents the celestial dance that occurs with the movement of our planets, sun and moon,” according to the artist’s description.

SDN is proud to be among the sponsors who have helped turn SculptureWalk into a thriving local attraction for the community.

“We appreciate all of our good supporters. SDN is certainly one,” Clark said.

For more information about the SculptureWalk displays, artists and ways to get involved in the program, see www.SculptureWalkSiouxFalls.com

For more information about SDN and its services, see www.sdncommunications.com.