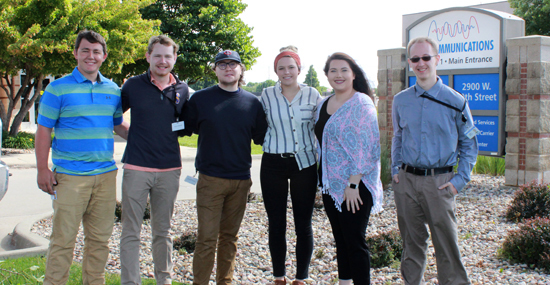 Six students from four postsecondary schools in the Sioux Falls area have joined the staff of SDN Communications, at least temporarily, and are contributing to the company’s successful experience with interns.

Most of the latest interns started in May and will work through the summer.

“They’re great, hardworking students. We often end up with the cream of the crop. We hope they feel the same about SDN,” said Amy Preator, director of human resources for the company.

SDN expanded its internship program about eight years ago, partly to help expose the company to good students who might become productive employees.

“It’s a win-win for both the company and the interns. Both sides get to experiment and see what they think about the situation,” Preator said. “I would say the interns are interviewing SDN as much as SDN is interviewing the interns.”

The company has had 39 interns during the past five years. This summer’s crew of six works in four different areas of the company. All are students at institutes or universities near or in Sioux Falls.

Following is a list of the current interns, including the area of the company in which they work, the school they are from, and their supervisor at SDN (listed in the order of photograph):

In addition to job experience, they have the opportunity to gain socially by participating in corporate activities, just like SDN’s 140 permanent employees.

Wendland, one of the six current interns, is from Baltic. He's a participant in the state’s Build Dakota Scholarship program, which provides assistance to skilled students at technical institutes who study in workforce areas of high need.

Wendland said he wasn’t sure what to expect before he got to SDN, but that his internship has been going well. He gets along with his coworkers on the warehouse and installation team, he said, and he’s getting experience in precise, relevant work.

“We do a lot of configurations of switches, and then go to the site and install them,” he said.

Switches are small appliances that channel data from input ports to an output port that sends electronic information toward its intended destination.

One benefit for SDN is that regardless of department, work done by interns helps the company get through summer when a lot of regular employees take vacations.

SDN CEO Mark Shlanta is a strong supporter of the internship program, which continues to work well, Preator said.

With jobs being relatively plentiful in the Sioux Falls area, finding good workers can be challenging for companies, especially for businesses in specialized areas, including telecommunications. A good internship program can help a company overcome the challenge.

SDN’s consistently has attracted high-caliber students – many of whom have gone on to become full-time employees, Preator said.

“We have a lot of great employees who started as interns. We hope to continue that tradition,” she said.