SDN ads pay tribute to real heroes of the workplace: IT pros 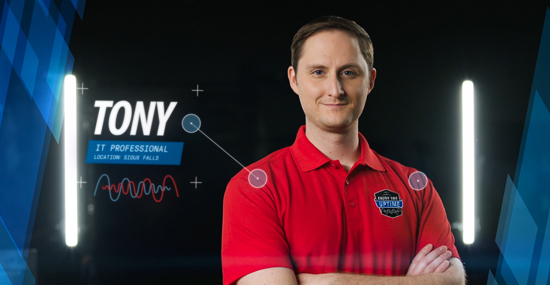 With businesses’ computer networks under constant attack by everyone from neighborhood hackers to international gangsters, IT professionals really have become heroes in the workplace.

Even the routine responsibility of keeping increasingly large networks up and operating smoothly puts a heavy burden on IT staffers.

Quite fittingly, the duties of overseeing computer systems and safeguarding electronic data gradually have evolved into a priorities at many successful and highly regarded companies.

For the past couple of years, SDN Communications has been recognizing the importance of information technology professionals in broadcast and print ads that end with the tagline, “Even IT pros up their game when they partner with SDN. Enjoy the UPTIME!”

The ads, which have sports overtones, also promote business-to-business services available through SDN that help IT pros perform at high levels.

The newest ad in the series will debut Feb. 4 during the telecast of the Super Bowl. Fittingly, the new ad is set in a computer work area that appears to be on a football field. The star of the ad is a returning IT pro named Tony, who’s described to be “in the zone.” Tony is shown moving data across multiple locations and then appears to be everywhere.

“His knack for supporting his team by moving data instantly and securely, without interruption, might have you believe he’s in multiple places at once,” the voiceover says. “But really, he just relies on SDN Communications’ vast network of over 30,000 miles of fiber to keep everyone up and running.”

Future ads in the campaign will underscore the benefits of SDN Managed Firewall and Managed Distributed Denial of Service (DDoS) Protection.

“It’s really about making the IT people in offices the heroes,” said Vernon Brown, vice president of marketing and community relations at SDN. “Every day, they’re in the background quietly solving problems. This is kind of a fun way to lift up those people in offices who make everything work.”

Ted Heeren is the creative director and founder of Fresh Produce, the Sioux Falls advertising agency that produces the ads for SDN. The imagery in the new ads is a little more dramatic and perhaps surprising than in some past ads, he said.

“This time around, we wanted to show our IT pros taking on an opponent. In these ads, there’s more of a threat or a sense of urgency where an It pro is using SDN to get a competitive edge,” Heeren said. “Showcasing an IT hero as an athletic hero is kind of fun.”

Chad Pew is among the in-house IT heroes at Sioux Falls-based SDN, a premier regional provider of broadband connectivity, cybersecurity services and related telecommunications solutions for businesses. Data security is one of the top issues facing IT professionals that work for businesses, said Pew, who is SDN’s IT manager.

“The bad guys are always looking for different avenues to get their hands on your data,” he said.

Employees who work on business networks typically are the weakest links in network protection, Pew said. So creating awareness of risks, and training and retraining employees has become a big responsibility of many IT professionals, he said.

Managing vendor access to data also has become a big issue for companies, Pew said, because vulnerabilities in a vendor’s network can provide backdoor access to the client company’s data.

“We need to make sure that we are putting the proper security measures in place to make sure vendors aren’t getting data they shouldn’t,” Pew said.

Other issues IT professionals often have to deal with include their employer’s use of cloud services, which can remove some security control from a company’s staffers. Therefore, service providers and their security practices have to be closely screened in advance, Pew said.

Managing big data also has become an IT challenge for many companies. How can vast volumes of data be effectively and securely stored, accessed and used? IT pros are helping figure that out, too.

So, remember to say “thank you” to the men and women who keep information in your office flowing and safe. It’s a big, important and complex job.