School bandwidth needs rise along with computer use 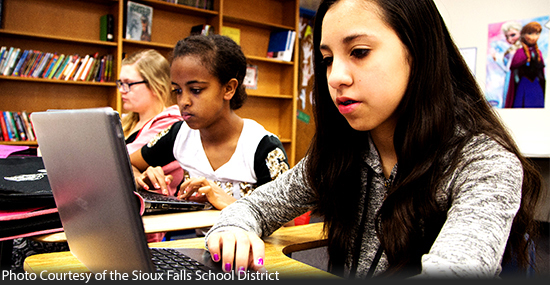 The Sioux Falls School District will begin the third year of its Student Technology Initiative in September with more broadband power than ever.

Education officials determined last school year that middle schools, in particular, needed more Internet connection speed, and they will get it.

Internet speeds available at high schools and elementary schools should be sufficient, according to Bob Jensen, director of assessments, technology and information services for the public school system. Demand for broadband speed will be evaluated again next year.

“I’m thinking it might level off for us. But it’s like anything else, the more you get, the more you use,” Jensen says. “As we move to more and more online textbooks and online curriculum software, the demand on the bandwidth will increase.”

Sioux Falls Public Schools launched its technology initiative in 2013 with the ambitious goal of giving every student free use of a mobile computer. The computer-to-student ratio was revised for the lower grades, and the overall program has shifted to a maintain-and-improve mode.

“We’ve had ups and downs. But, for the most part, I would say it’s gone very well,” Jensen says.

Occasional infrastructure glitches have to be worked out, and keeping thousands of computers running is an ongoing challenge for the district’s technology staff.

During the first year of the project, the district loaned a Chromebook to every student from third grade through high school.

During the second year, iPads were distributed to kindergarten, first-grade and second-grade classrooms. Each class of roughly 20-some students received seven iPads. Each teacher also received one.

High school students are allowed to take home their Chromebooks. Other students must leave their computers in school or, in the case of the youngest students, in the classroom.

More than 18,000 students will have access to mobile computers during the 2015-2016 school year. Bandwidth capacities have been raised, as needed, to accommodate online learning opportunities for students.

Connection speed capacity from high schools to the Internet was expanded last year from 1 gigabit per second to 2 gigabits per second. Within the district’s Wide Area Network, each high school has up to a 1 gigabit of capacity. One gig (Gbps) equals 1,000 megs (Mbps).

Capacity at middle schools was increased temporarily last year from 150 Mbps to 300 Mbps to accommodate statewide student testing, which was conducted online. The capacity for middle schools will be raised to 500 Mbps for the 2015-2016 school year

Elementary schools are at a 150-Mbps limit, which appears adequate.

The state helps the district pay for the bandwidth, which is provided by Sioux Falls-based SDN Communications.

The unexpected high cost of repairing and maintaining computers is probably the biggest surprise in the technology initiative, Jensen says. Computers that can be taken out of classrooms tend to get banged around more.

The district provides protective cases for computers and tries to replace retired Chromebooks with higher-quality models. Jensen estimates that 25 to 50 Chromebooks have to be replaced each year.

But laptops, in general, only have a shelf life of a few years.

“We’re hoping to get four years out of them. That was the plan,” Jensen says.

So the district will probably replace a lot of computers during the next few years.

Students may use their own computers, if the devices operate on the same software that the school district uses. However, they must use school-provided devices when taking tests.

SDN takes pride in providing bandwidth for most of the schools in the state. The company also has helped the Sioux Falls district and others with infrastructure improvements.

For more information about SDN and the company’s products and services, check out SDN Communications website.