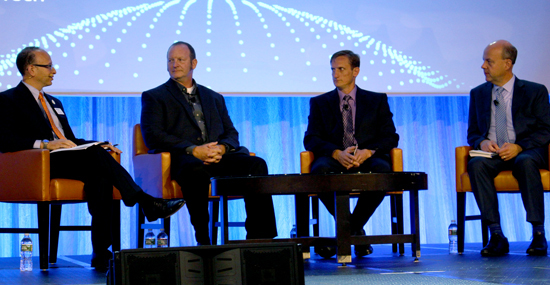 I approached this panel conversation with some dread; I could think of little new to present to this crowd of 900 attendees well versed in telemedicine. Yet, it seems, the topic finds itself as a perennial presentation on many telecom agendas. NTCA – the Rural Broadband Association wanted a quick-hitting update for its fall convention of rural telephone companies gathered in Philadelphia.

Sometimes SDN Communications gets referred to as a pioneer provider in the telemedicine field because of our long partnership with Avera eCARE. That gives us too much credit; we only provide the fiber or pipe, if you will, for the eCARE Emergency connection envisioned long ago by the smart IT folks and doctors at Avera. Thankfully, there on a stage in the city of Brotherly Love, Avera received the adoration it deserves from its newest Kansas customer. HaysMed, that state’s western regional healthcare hub, recently connected to Avera eCARE in Sioux Falls via its local telecom provider, Nex-Tech, and SDN.

Still, I had primed myself to relay our newest methods of connection. I was ready to talk master circuits, MPLS, routers and such. I memorized Avera’s latest analytics: more than one-million patients served, 330 connections in 14 states, 13 percent of the nation’s critical access hospitals served, and $188 million saved through the video “house calls.” I felt proud calling our Sioux Falls partner the largest virtual hospital. I also touted Avera’s latest innovations in:

The numbers and new delivery models surely impress, but the news in telemedicine isn’t really about technology anymore. HaysMed IT director Scott Rohleder delivered the panel’s headline: patients and doctors trust telemedicine and even find improved results in some practices.

That’s right, a camera, which alone scares most people and even more so if it’s connected to a doctor on the other end, improves outcomes. The medical field bearing the best result? Behavioral health – a field you might think would demand putting patient and doctor in the same room instead of stretching thin fiber over hundreds, if not thousands, of miles.

We all know the stories of how doctors on video connections in emergency rooms save lives. I’ve told them here and documented them in videos, including one of Parkston’s blizzard baby. However, whether it’s a struggling teen or an aging Vietnam Veteran, for some reason, talking to a doctor via bits and bytes works very well.

So, while I thought our face-to-face panel discussion would highlight the latest methods of cost-savings on e-connections, I learned the beauty of human connections transcend the technology. And isn’t that the way it should be? The technology should be invisible. Let the magic and healing happen between people.