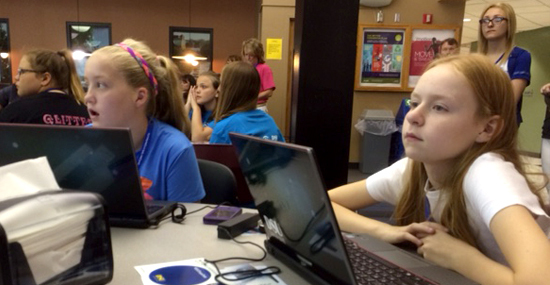 Security comes in all forms. In the case of my 12-year-old daughter going to cybersecurity camp for girls, it came in the form of bringing one of her favorite teddy bears to the all-week camp.

She packed it with her essentials, but with a little hesitation for fear of what her friend and roommate, Alyssa, might think. When they unpacked, however, Alyssa sheepishly pulled out her tattered teddy, too. They both laughed and placed their bears on the bookshelves where they could keep watch and secure the dorm room.

Emma and Alyssa are at that awkward, middle school age: alternating between girls and young women. GenCyber: Girls in CyberSecurity is designed to inspire young women and defeat the trend of girls losing interest in technical fields when they reach middle school.

That’s why, as a parent, I was so pleased with the welcoming remarks Dakota State University President Jose-Marie Griffiths had for my daughter and 143 other girls at GenCyber camp.

“You are smart, and you are brave,” Griffiths told them.

Smart because the girls-only camp offers an opportunity to explore Science Technology Engineering and Math (STEM) careers. Brave “because this might be the first time you’ve been away from home and your parents for five days,” Griffiths said. Talk about knowing her audience! Clearly, Griffiths, an accomplished scientist who was appointed by both Presidents Bill Clinton and George W. Bush to the National Science Board, remembers what it was like embarking on a new journey as an adolescent.

Her assurance set the stage for a week of girls experimenting in technology and meeting impressive role models.

At midweek, Facebook’s Director of Security Operations Jennifer Henley inspired the girls. Thanks to SDN Communications’ sponsorship, I joined the lecture and gained a parental sense of security by checking in on Emma. (She was doing very well, by the way.) 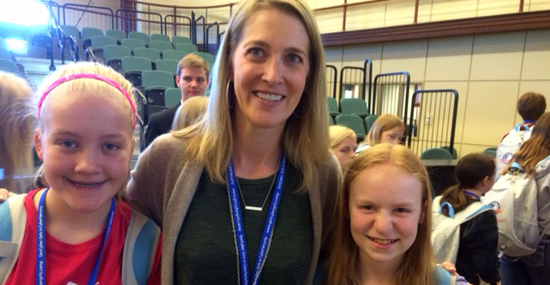 Henley told the girls of her unexpected and winding path before taking the helm of Facebook’s security. Like me, she went to college to be a journalist, but ended up in the technical world. Coming from a communications background, she told the girls the information security world suffers from an image problem, most likely because 78 percent of its workers are all the same: white men. She did not blame men for the problem, but through research, she demonstrated there just aren’t yet enough women in the field to debunk the following falsehoods:

“Don’t let anyone rent time in your head for free,” she advised the girls. “You decide what it will be.”

She is right. We live in an age where women can and must play a lead role shaping the future of Information Security. The workforce demand outpaces the current talent pool. The field clamors for people driven by math, analysis, and even communications.

An estimated 1.4 million security jobs will open in the next four years. Some fear two-thirds of those will go unfilled, leaving us vulnerable as every aspect of our lives enters the digital realm.

Those staggering statistics demonstrate why SDN believes in encouraging women and other underrepresented groups to pursue careers in Information Security. We can’t afford to leave out half the world’s brainpower when the industry is barely one step ahead of cybercrime. Plus, diverse perspectives yield a stronger approach to problem-solving.

“We know from studies that adding women and unrepresented minorities increases the collective intelligence of groups working on projects,” Henley reminded us.

Henley also made the case for empathy as an essential component of security awareness. Empathy? Who would think there’s room for empathy in Information Security? After all, it’s a scary world of catching bad actors in dark rooms (quite possibly in their parents’ basements) who want to steal our credit cards, Social Security numbers and data. While many perceive an Information Security career as cops after robbers, there’s room for a different view. Instead of relying on fear tactics, effective security awareness works to equip users with the tools to better navigate the digital Wild West.

It’s with that sense of empathy that Henley enters Facebook’s office every day. First and foremost, she considers how she can protect and improve the user experience when people share so many details of their lives – all 1.6 billion lives on the world’s most popular app.

“I do think that’s glamorous,” Henley said in a tone unmasking her deep passion for her work that affects so many.

It’s not only glamorous. It’s creative. It’s compassionate. Many young women use those words to describe the careers they desire. Words, branding and image matter. In fact, Henley said when researchers replace the term “Information Security” with “Protector of the Internet,” girls’ interest in the field jumps to 46 percent.

I don’t know whether my Emma will grow up to be a Protector of the Internet. It’s too soon to tell, and she has years of career exploration ahead. But I do know the GenCyber experience, offering an empowering environment to learn about coding, hacking, robots, and more, will give her the confidence to pursue a passion.

“Find your passion,” Henley told the girls at the peak of her plea. “I don’t care if it’s security, IT, art, or journalism. You will be infinitely happier, and that will drive your success.”

Happy and successful. Those are good traits to follow GenCyber’s week of smart and brave. A parent could not ask for more.